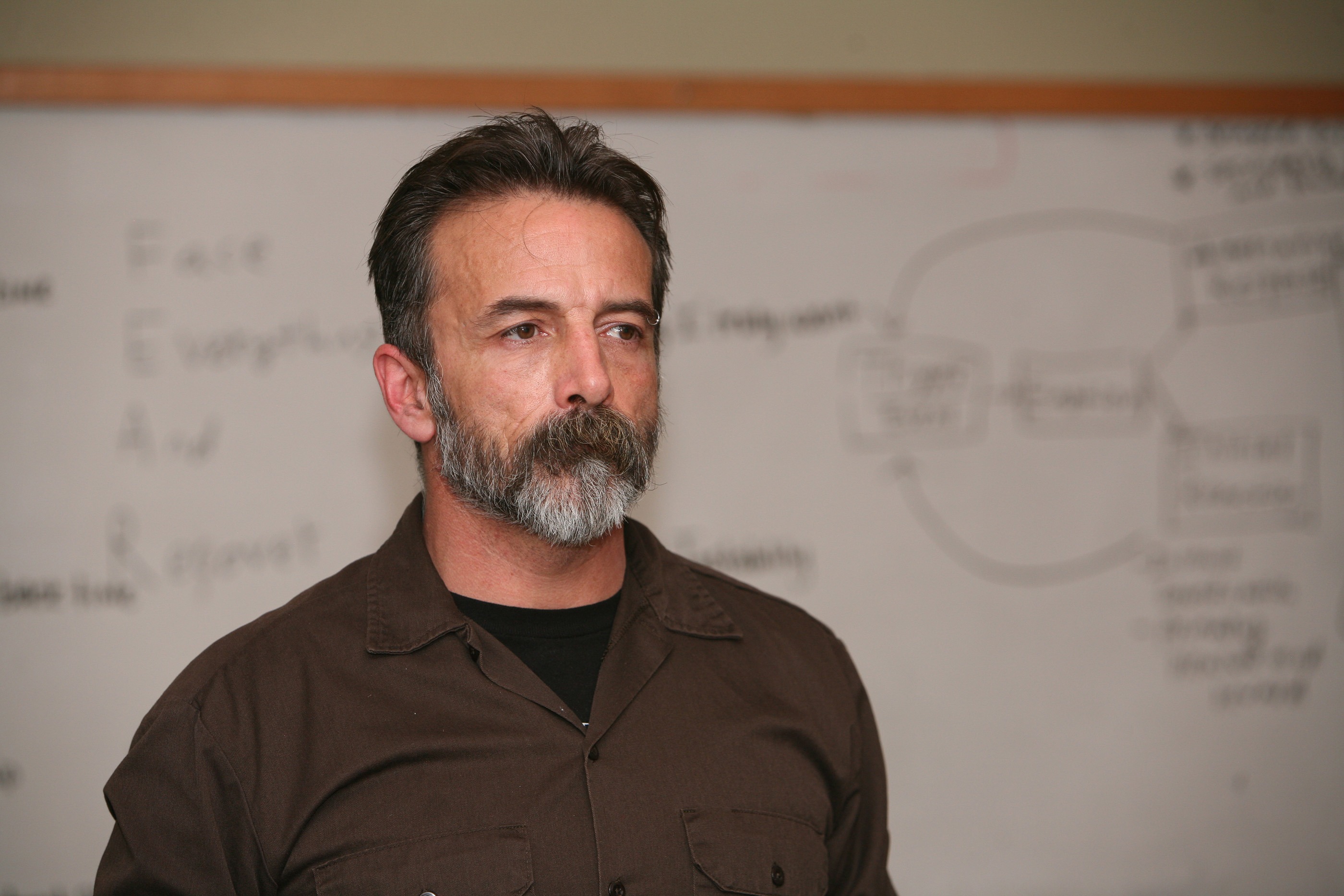 Thomas is a peer support worker at Turning Point Recovery. As a recovering addict himself, he can tap into his own experience and relate intimately to the challenges and successes of recovery. Thomas always keeps his phone so he can be available to clients when they are struggling and need support.

But seven years ago, Thomas was sitting alone in his room in an inpatient facility with the thought that no one in the world wanted to hear a word he had to say, and the only possible solution he could come up with to solve the mess of his life was death. He prayed for it. Thomas says it was that night that he found himself at the first step of recovery; hollowed out and alone, he admitted defeat. He asked for help.

It was a long road to that night in the facility. Thomas grew up in the roughest neighborhoods of Albuquerque, and began drinking when he was ten. At eleven he smoked pot for the first time and felt he had found the answer to life.

With the logic of a ten-year-old boy, Thomas felt he could never compare to his tough, alcoholic construction worker father or his two athletic older brothers. “I was a little guy running around this family of big old dudes that I thought were larger than life. As a kid, I just never felt like I’d measure up to that. And I kind of became the black sheep and rebelled. I wouldn’t say that I carried the weight of insecurity back then. But it was definite, I’m not going to be like these guys. So I’m just going to be a good little bad guy.”

Thomas’ life was marked by that paradox found in many addicts: a remarkable sense of responsibility coupled with remarkably irresponsible and irrational behavior. Thomas fought, smoked, and drank his way through high school. When he was 17, he got his girlfriend pregnant. Thomas finished school, and immediately got a job, married his girlfriend, and started a family. But he continued to drink and smoke, often spending his entire paycheck. He would stay up until 2:00 or 3:00 in the morning, and then drive to his worksite so he would be there at 7:00am when work started. “It never occurred to me that I was an addict. Never even a thought of it.” This went on for ten years – and then it all fell apart. “You know that theory that we stop maturing emotionally when we start using? I stayed, emotionally, a 10-year-old all the way through my 20s…and I think what happened is my wife outgrew me.”

Thomas was 27 when his wife left him. At about the same time, his dad – that larger than life guy who he’d always had on a pedestal – committed suicide. In the middle of the storm, Thomas was accepted into the city firefighter program, after years of trying.

Thomas threw himself into the rigorous training program, and succeeded. He buried his anguish in physical and academic work. “But man, did I ever grieve my dad? I just think I stayed under the influence of something the whole time. I was suicidal. When I was a fireman, you know, I was out in the field and fighting whenever I could. When the bells would go off, it was like, whatever. I’m going to either kick this fire’s ass and be a hero, or I’m going to get killed. It doesn’t matter to me. The grief would sneak in and I would hold it back with drugs. I would put guns to my head, literally, in tears and stuff – but I never did the act. It was pretty heavy.”

Thomas worked for several years as a firefighter, gravitating toward his co-workers who were heavy drinkers. “And then there was a smaller group of guys who smoked crack. But when I got into heroin, I was on my own. There was no other firefighters doing heroin with me.”

Thomas continued to do heroin on the job for another two years before he was caught. He lost his job, and his job was his identity, his whole world. It was like falling off a cliff.

“Everything escalated then. I was a heavy, heavy heroin user and I was doing atrocious things every day to get it.” Thomas was in and out of jail, his life crashing around him, and still, it never occurred to him to ask for help. “I was miserable. But I didn’t know how to change. I thought if I could just stop using these drugs, somehow, some way, if this drug use would stop everything would be fine. And then there would be times that it would stop for a little bit, but I would just end up relapsing.”

His two children had grown up. They had families of their own — and one day they had enough. “It wasn’t an intervention. It was a decision. It was very real.” He was no longer welcome in their lives.

Thomas always had a close relationship with his children and was proud of his role as father and grandfather. But he couldn’t see how he could change a lifetime of drug use, a lifetime of identifying as the “good little bad guy.” It was the only way he knew how to interact with the world. Their decision was devastating, but he didn’t know what to do. He sat in the same spot all night long, stunned and paralyzed. In the morning, he took off driving, not knowing where he was going.

He found himself at his daughter’s job, in tears. For the first time, he asked for help. As he puts it, it was a profound surrender. A few days later he was in a residential treatment center. Thomas credits that night in the residential center when all he could imagine was death as the moment that brought him back to life. “I had a spiritual experience in rehab and I haven’t used since.”

Thomas committed to the work of his recovery with the same fervor he once threw himself into being a firefighter. Seven clean and sober years later, Thomas is a peer support worker. He is going to college for the first time to be a clinician in the field of recovery. “I’m doing work I love. I have relationships with my kids and grandkids. Man, they’re not even gonna believe the stories they hear about me. Recovery has given me back family, goals, purpose, reasonable happiness.”

Thank you for connecting with us. We will respond to you shortly.